The City of Kennesaw, in partnership with The Swift-Cantrell Park Foundation, celebrated the grand opening of the all new inclusive playground at Swift-Cantrell Park this past week. The ribbon cutting ceremony began with commendations by Kennesaw Parks and Recreation Director Steve Roberts, Kennesaw Mayor Derek Easterling, and SCPF President, Phil Barber and finished with dozens of children swarming the new playground to enjoy the new amenities.

“From listening and engaging with community residents, the City of Kennesaw recognized the need for an inclusive playground in the area,” said Mayor Easterling. “Starting today, this playground will play an important role in socializing children with disabilities, and it will offer an engaging and positive environment where all children can participate and play together. This playground will serve not only the emotional and mental well-being of children with disabilities, it will serve our community in developing social equality and positive relationships in the area.” 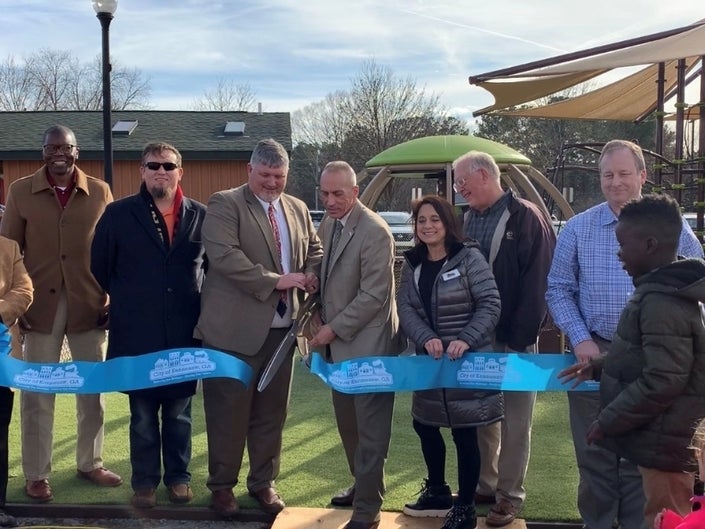 The idea of an inclusive playground was championed by the Swift-Cantrell Park Foundation and presented to the city in mid-2018. The Foundation worked with City Manager Jeff Drobney and Parks Director Steve Roberts on bringing that vision to fruition. The Foundation closed the deal with a $100,000 donation to the City of Kennesaw for the project.

“Our foundation has long been passionate about creating a playground that is inclusive of all kids,” said SCPF President Phil Barber. “We worked hard to raise the money necessary to make this project happen and worked tirelessly with city officials to bring the inclusive playground to our park.”

The inclusive playground features four additional play apparatuses spread over roughly 5,000 square feet of space that was previously unused. This includes a large play structure with wheelchair accessible ramps that lead to a ropes tower, sensory stations, an eight person wheelchair sway fun, and a slide. The ramps also leads to pod climbers, a tunnel system, and climbing features. The main play area is under 40 feet of shade to keep children cool while they play. Furthermore, the entire 18,500 square foot space has been converted from mulch chips to turf so that it is accessible to everyone. Every child will be able to maneuver the entire area.

“One hundred percent of all donations made to Swift-Cantrell Park go towards projects like these,” said SCPF member Lee Elliott. “We are super grateful for everyone that has supported our Foundation by either running our race (Swift-Cantrell Classic) or taking advantage of our partnership with Gas South or donating directly to us. You helped make this inclusive playground a reality.

Click here to donate to the Swift-Cantrell Park Foundation.